Now, if you came to my live show, you may have already seen this.

Did you know that you don’t have to upload a compressed version of your project to YouTube? You can actually upload much larger files like ProRes and DNx and YouTube will accept them.

Of course, who would want to actually do this? Well, I do, mainly because I’m vain and…

YouTube does have their “recommended upload encoding settings”. And your NLE and transcoder probably have a YouTube preset as well. Both of these typically recommend an h.264. However, if you shot on a higher end camera, h.264 is a huge hit in quality from the original file. Plus, no matter what you upload to YouTube, YouTube will recompress it again.

Let me repeat, WHATEVER YOU UPLOAD TO YOUTUBE, YOUTUBE WILL RECOMPRESS IT. There is no way around it. 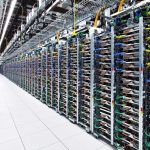 These presets exist because not only do they make your upload time shorter, but it also taxes the transcoders over at YouTube less. Think about it: YouTube has over 86,000 hours of video uploaded daily, and all of those files need to be transcoded to the various flavors YouTube can display, so they want to maximize their computing and storage resources. It’s a win-win…you get a quicker upload, and YouTube can turn around the file faster.

…Unfortunately, this means you take a hit in quality because you’re dumbing down your high-resolution file down to h.264.

So, if you have the bandwidth, and you have the time – in some cases a 10x increase in time – upload your ProRes or other high res masters. You will see a quality increase, and you can thank me later.

2. Bare drives are safe for storage

Those caddies for drives were made for technicians to easily mount drives and to clone and dupe several drives at a time. However, I’m seeing them pop up more and more on editor’s desks.

Bare drives are not floppy disks. You can destroy the drives in many ways. You can shock it, drop it, get it dirty, and wear the connector.

The first issue, scariest, most damaging and easiest to do is, ESD or electrostatic discharge. And don’t tell me you ground yourself before every touch. Maybe you ground yourself before you remove it from the bag, but then you move about the room, you roll your desk chair, you pick up static. And for the record, just touching metal isn’t good enough, you have to touch grounded metal, so the metal legs of your desk ain’t going to do it.

The second is a no-brainer, you can drop it. Now maybe you’re saying, “but I can drop an enclosed drive too!” Yes, but even the most basic of drive enclosures have some form of shock buffer and if they don’t then you should not trust your sensitive data on those either.

The most overlooked is finger oils. Touching the circuit board of a drive with your bare hands is going to transfer oil to it. This oil can break down the drive’s components, but more likely will become a bonding agent for dust buildup that will insulate components and cause them to eventually heat up and fail. In addition, your finger oils can create electrical connections between components.

Lastly, that hard drive connector was never made to withstand many inserts. It was meant to be connected a few times. It’s not USB. The more you use it, the more it wears, the cheaper the drive, the fewer times it can be connected.

“But Vince, we always have another backup.” 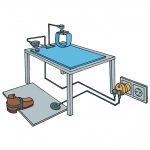 This one is laughable. How long will it take for you to access that backup? I’ve been to facilities where that backup bare drive is safely stored offsite and a cut need to go out tonight. You’ve just shocked your bare drive and now you have to spend a few hours of time retrieving the backup. A team of AE’s editors and producers are on the clock for those few hours of retrieval.

Now I know you’re saying “bare drives are cheap and convenient, and I don’t have to keep all those power supplies around.” So you’re going to start acting like a technician and stand on an antistatic mat, with an ESD wrist strap and wear ESD gloves. Plus you’ll keep isopropyl alcohol on hand just in case.

But even if you did that, drives out of enclosures are still more susceptible to vibration and the drives little vent holes are more likely to attract dust and dirt. That’s right enclosures have vibration dampening and obviously provide a further barrier to dirt.

3. You can’t create ProRes on Windows

Apple makes ProRes, so there is no reason for them to make it available on a Windows or Linux platform, right?

Kinda. Unless you show them the money.

Yes, Apple developed and owns ProRes. And Apple is very protective of this wonderful codec. Apple licenses 3rd parties to use ProRes. And Apple is very selective on who get’s this great honor. Normally, its hardware implementations of ProRes – that is, done on a dedicated hardware chip as opposed to in software. This could be a camera or a capture card As Apple itself doesn’t make any hardware encoders to create ProRes, this wouldn’t introduce any competition to them.

If it IS done in software, then it’s normally in a software solution, which would not otherwise compete with a potential Apple software sale or, is a higher end piece of software that makes buying a Mac to accomplish the ProRes transcode a viable option.

Now, there is a market for unauthorized implementation of ProRes on Windows. You’ve probably seen them advertised on forums while Googling a tech question. Many of these companies are now out of business because Apple lawyers don’t mess around.

On top of that, with unauthorized implementations, there is no guarantee the file will have the same visual quality that an authorized implementation may have. It also isn’t guaranteed to play everywhere, or have a long shelf life of the creating software disappears. If you’re in a post-production environment that needs to generate media that goes through QC, you may fail QC by using one of these unauthorized apps.

Apple maintains a list of Apple ProRes Authorized Products. Sadly, they don’t break it down by OS, so it’s not always clear what platform Apple has authorized.

So, yes, you can create ProRes on Windows, but it’s probably gonna be expensive or unauthorized. So choose wisely.

4. Editors only need to know how to edit

Editors today need to know how to edit in every popular NLE on both Windows and OSX. They need to have at least a basic understanding of how the systems work and how data gets in and out of them.

In addition, Editors need to have a basic understanding of sound clean up and color correction. This is at a minimum, Editors should have a thorough knowledge of Photoshop and After Effects.

What? Vince, You’re crazy! I do fine without any of that. Maybe you do. But when a producer needs a problem fixed and the editor in the bay next to you can come to the rescue, who do you think they are going to hire back first next season?

You need to be a swiss army knife. Yes, it’s great for cutting, but it can do all this other stuff in a pinch.

Today many producers have smaller budgets and they are looking for one-stop shops. All this knowledge allows you to be that shop for smaller indie projects and development presentations. And when those producers grow and move on to bigger better content they are going to bring their savior, their swiss army knife with them.

But wait, if I’m going to do all that I need more money. Maybe, but with computers making edit decisions and post being farmed out to other countries, the only way to stay competitive is to offer everything they need in one stop.

Now you’re probably saying, that’s a lot to learn, where do I start? I’d start by exploring all that your current NLE can do. Become an expert with the color correction tools, both curves, and hue wheels. Jump into the sound capabilities and examine the EQ.  Break back into that effects drawer, notice the star wipe is gone. It blew my mind and I had to create one in After Effects.

Ask your AE’s about their workflow, and teach them yours.

Keep moving from program to program and before you know it, you’ll be creating star wipes in seconds.

5. Video needs to be action and title safe

OK, everyone knows what title safe and action safe are, right? Refresher: Some NLE’s call them “guides”. These guides are a holdover from the days before flat-panel televisions when CRT tubes are what every household had. CRT tubes curve, which caused portions of the video on the screen to distorted or not even visible. Action safe – the largest guide – was meant as a guide for tv and filmmakers to know when action may not be visible to end-users TVs. Don’t go past that guide for important action, and you’re OK. 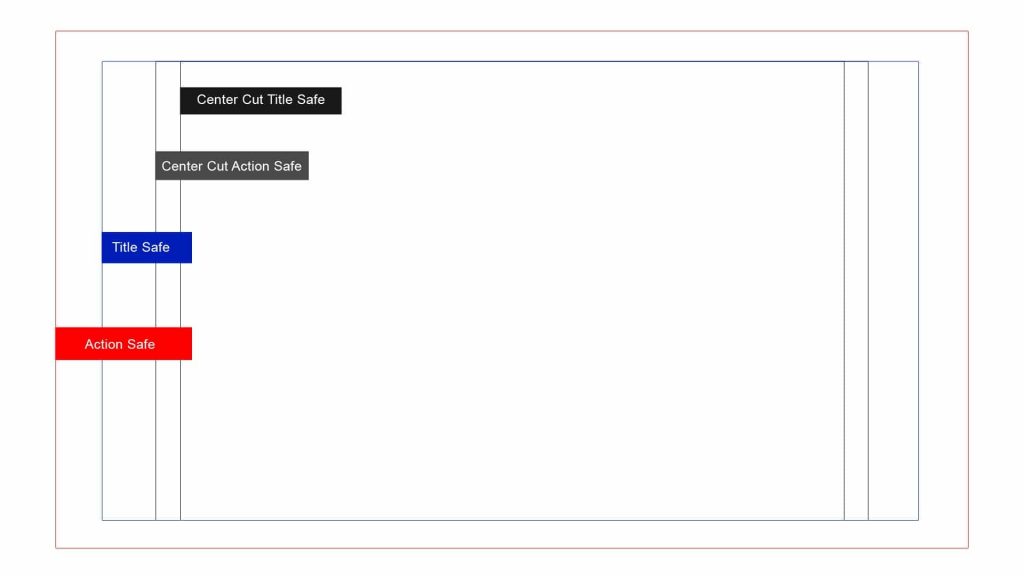 Title safe, as the name implies, did the same for titles. It’s a smaller area as due to the curvature of the edges of the tube, text can appear distorted. So, the rule of thumb was to keep the titles in this area.

But, you may ask, “Michael, how is this even relevant now that everyone has flat panels?”

And you’d be right.

And then you might ask “But if don’t need to use the guides, can I go right to the edge of the screen?” And I’d give you a mean side eye.

Even flat panels have what they call over-scan, or areas of the video image that the end user doesn’t see, and how large this area is can, unfortunately, differ from manufacturer to manufacturer…and country to country.

So, nowadays (and I’m looking you, YouTube folks), keep everything within action safe. All modern flat panels can display it, and you won’t run off of the screen. As for personal preference, I like keeping text still within title safe, as I find it easier to read than having the text extend to the end of the screen.

It’s nice to say safe title doesn’t matter, but watch your show get rejected by various distributors if you ignore their requirements., Even DCP’s for theatrical require a title to be raised a certain amount above your mask to allow for in theater cropping and the head in the seat in front of you.

You’re completely right. I would *hope* that any person submitting a program to a broadcast outlet or distributor would adhere to Redbook or the specs provided by the outlet. As you know, blanket statements about deliverables are a lot like “standards”…there isn’t just one!

I can’t believe he called the SE and Lisa. Nice Flux Capacitor… The set is dressed nicely. Maybe add a classic arcade game (I know Vince had one at this house)… a bit of pop tech/gamer culture, possibly a NuBus Avid or AVBV… rmags.

I enjoyed the myths and look forward to more intel and antics from both of you.