While the next episode of 5 THINGS is in production, I wanted to give you a quick update on other 5 THINGS news. So let’s get to it:

NAB, the National Association of Broadcasters convention kicks off next week. It’s the annual tech nerd pilgrimage and business card exchange, and I’ll be there Friday, April 21st to Thursday, April 27th.   I have a few appearances I’d like to clue you in on. 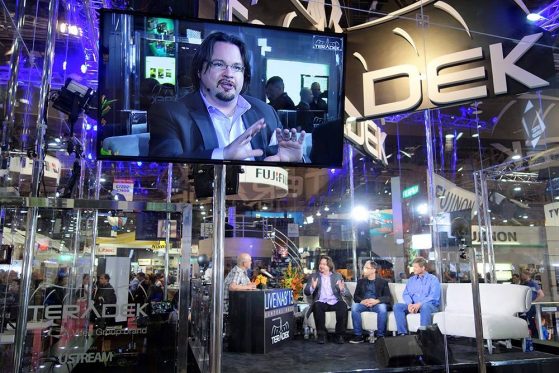 First is the Teradek Post Production Panel, in conjunction with Pro Video Coalition.

We affectionately call it the fishbowl, for somewhat obvious reasons, as we’re encased in a clear plexiglass stage in the middle of Central Hall. I’ll be on the panel with Woody Woodhall, Graham Sheldon, and Scott Simmons. If you’re at NAB, check it out Booth C6025 on Wednesday, April 26th at 11:30 am Pacific.

Not going to NAB? Go to provideocoalition.com or teradek.com for streaming info. I think it will be posted online after the show as well. If I get the link early enough, I’ll update this post with the info. Update-LIVE Link: https://www.provideocoalition.com/event/teradek-nab-2017-live-show/ 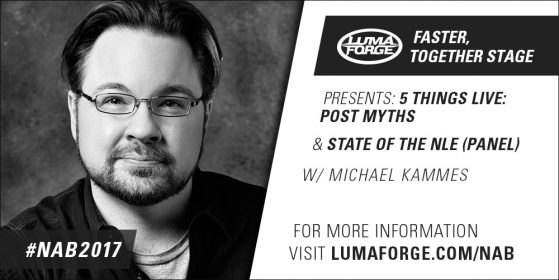 5 THINGS – a live episode, followed by a panel discussion.

Also on Wednesday the 26th, I’ll be doing a 5 THINGS episode LIVE thanks to the kind folks at Lumaforge.

Come by at 2:30 pm Pacific at the Courtyard by Marriott. Lumaforge has 3 days of panels and speakers so I HIGHLY recommend registering ASAP at lumaforge.com/nab.

As if a live episode of 5 THINGS wasn’t enough, I’ll be sticking around to be on another panel discussion immediately following, this time with the brilliant Oliver Peters and Bill Davis. Scott Simmons again will round out the panel. 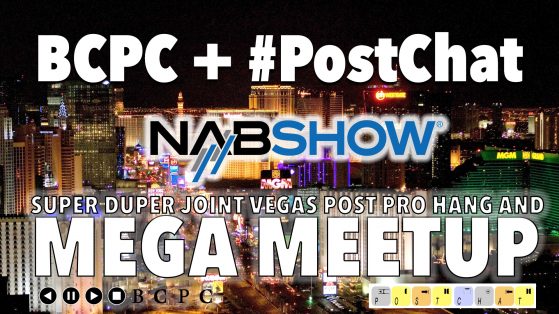 There are a few after parties and meet-ups that I do recommend if you dig 5 THINGS.

First one is the joint Blue Collar Post Collective and #Postchat meet-up on 6 pm on Sunday. We’re again at O’Sheas, at the LINQ promenade. Just a bunch of creative post people getting out from a dark edit bay.

I’ll also be hitting the 16th annual Supermeet on Tuesday the 25th hoping to win something. Hundreds of thousands of dollars of awesome prizes are to be raffled off, plus a whole host of speakers and demos. I think a few tickets are left, so register at Supermeet.com and I’ll buy you a drink.

My friends Sean and Stephanie over at Rampant Design have a fun challenge going on. Do a little dance, make a little video, and win some way cool stuff. Plus, you get some free effects out of the deal. Check out rampantdance.com for more info, and then head over to rampantdesign.com and let your mind explode with all of the nifty stuff they’ve got.

Lastly, I’d like to meet up with YOU. I’ll be on the show floor quite regularly. Let’s talk tech, and let’s talk media. No really, I wanna meet you in person….hit me up online and let’s meet up and chat.

5 THINGS will be back in May with a new episode, so until then, learn more, do more.