For a Limited Time Only
You have a License To Operate…
Lettuce, Tomato, and Onion.

No, tech friends, it’s yet another F*CKING storage medium, because, you know, spinning disk, solid-state, optical drives, and the cloud just didn’t keep us busy enough. It’s magnetic tape, and it’s the least sexy sibling in the storage family (and yes… there are sexy storage family members.)

It’s been around since the late 90’s. Linear Tape Open was initially used to backup Excel docs and your credit card numbers in data-centric business centers. 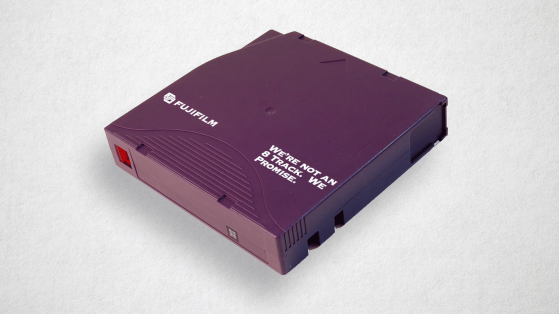 It’s only been over the past 8 or 9 years or so that the capacity, speed, and file accessibility has allowed LTO to be used in the realm most of us are familiar with…that is, with rich media.

Initially, folks used proprietary and expensive software to write data onto an LTO tape in a TAR format. The TAR format is a way of wrapping many files together – much like a ZIP file, only TAR retains user and file permissions. While TAR was great at wadding all your files up for retrieval at a later date, it could be quite a pain to retrieve any 1 file – often times the entire TAR file had to be scanned – or in some cases, the entire TAR had to be restored and all of the data extracted – for your one single file.

And so it was, in the year of our Lord 2010, LTFS was brought to the tape masses. LTFS, or Linear Tape File System – enabled LTO tape drives to be seen and somewhat utilized at the OS level, kinda like a USB or thumb drive would appear on your system…with some caveats. As LTFS emerged on the scene as a way to bypass many of the hurdles of tape usage, it was the capacity and speed of the LTFS format that made the format very attractive. GB and TB of data could fit in your hand, could run at speeds far surpassing Firewire 800, and it cost 6x less than the cheapest hard drives out there.

Today, we have LTO-7; clocking in at 6TB per tape and reaching speeds of up to 300MB/s. 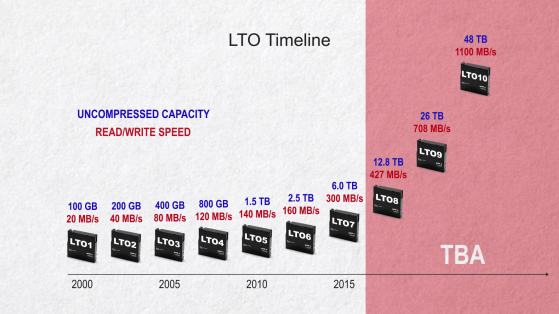 As is with most tech things nowadays, the price is the overriding factor. LTO-7 is cheaper than the cloud, as well as even the cheapest bargain bin hard drives.

It’s difficult to compare cloud storage, which is based a rental model, vs buying drives outright, which is a 1-time cost. So, I’ve averaged prices out over 4 years. After 4 years, 80% of hard drives out in the wild still function, so it’s a good ballpark number to compare from. 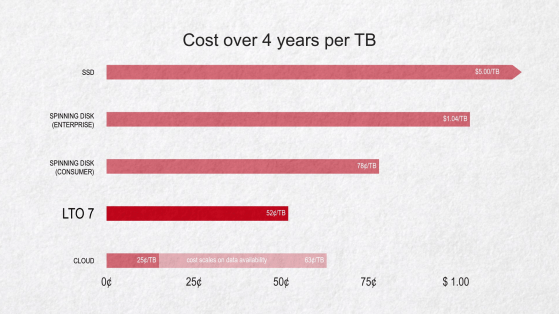 Another key statistic not represented is that data on an LTO tape can be compressed, thereby gaining 2 or more times the storage capacity on the same LTO tape.

When we also look at read and write times, LTO-7 has a theoretical max speed of 300MB/s. This is much faster than USB 2.0 and any flavor of Firewire, as well as almost 3x faster than standard office ethernet connections. I’ll admit, even though it’s twice as fast as the last generation of LTO-6, it’s becoming less impressive, with newer computers coming stock with USB 3.0, eSATA and Thunderbolt ports…but it still smokes your few MegaBytes a second up to the cloud. 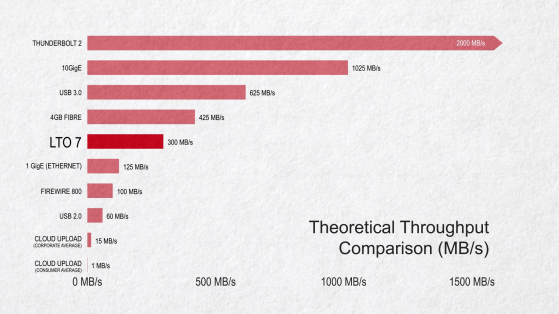 Comparing the throughput of LTO-7 vs common connection methods.

Now, I’m sure all of us have had the unfortunate experience to lose a beloved hard drive. Either due to age, or knocking a can of cherry coke onto the drive. (true story) Hard drives are volatile punk bastards and often leave this mortal coil way too soon.

While the cloud is undeniably the most reliable and immune to random bouts of Cherry Coke, the aforementioned upload and download speed to the cloud severely impacts the usefulness of the medium. You also get dinged a bit more on retrieval of that cloud-stored media, which could seriously hose your budget. LTO tape, on the other hand, takes a licking and keeps on ticking.

LTO is rated for 15-30 years of shelf life – which makes it an ideal candidate for secure, long-term backup and archival. Plus, many insurance companies often will lower insurance rates for on-location work if the media from the shoot is retained on LTO tape. As a bonus, many studios and networks often have a deliverables list with LTO tapes listed as a mandatory format.

3. What are the downsides of LTO?

As I hinted to a few minutes ago, the read and write speeds are no longer as attractive as they were even a few years ago. While they’re good, they’re not as fast as a newer Thunderbolt or SAS RAID. The upside is that every 2-3 years, a new version of LTO comes out, and speed usually increases dramatically from version to version.

LTO specs, as developed by the LTO Consortium – detail the roadmap and specifications that all magnetic data tape manufacturers adhere to. Part of these specs outline that each LTO drive must be able to read tapes that are 2 generations older. This means that an LTO7 drive purchased today (finger) can read media from an LTO 5 tape from 2010. 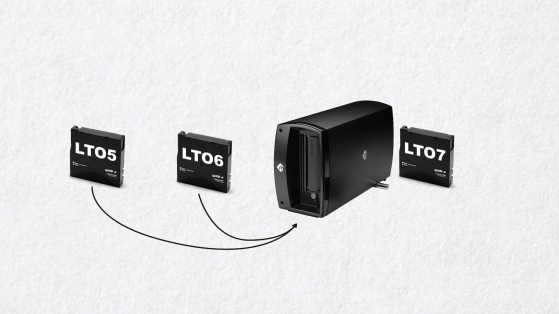 While as a user you can certainly hang onto that LTO-7 drive so in 10 years you can pull that old media back, most users will want to migrate the data to a newer tape format for the increased data capacity and compatibility. This can be challenging with new versions to the LTO format every 2-3 years. So, do you migrate, or like that old Floppy, Zip or JAZ drive you may have, do you just hang on to the reader? 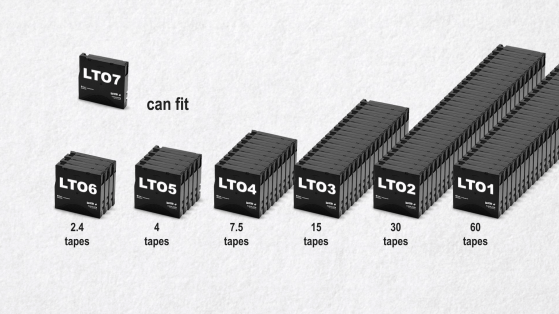 Each generation of LTO tape can hold ~2x that of the previous generation (uncompressed).

Back to LTFS: using LTFS to make tape usage easier is not 100% foolproof. While drivers to use LTFS are free to download, some OSes have a helluva time reliably reading and writing directly to tape. Thus, we require middleware – custom software – to bridge the gap from OS to tape. Often, these pieces of software have a price tag, from a few hundred to a few thousand dollars or more.

In addition, the hardware – a single tape drive, will also be over $2000 at the bare minimum.

Utilizing LTO requires 3 things, as much as I wish it was 5.  An LTO drive, software to read from and write to the drive, and blank media. These can either be purchased individually or in the case of some turnkey systems, as a bundle.

These single drives typically connect via SAS, which means you’ll need a SAS card inside your computer – yet another cost. 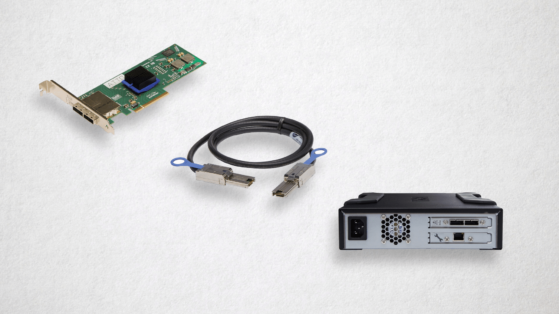 However, companies like mLogic make drives like mTape– which is one of the first Thunderbolt LTO drives. It’s an IBM drive inside but connects via a Thunderbolt cable.

Keep in mind, these are single drives. When we get into large volume scenarios, we then have the option of multislot libraries, capable of automatically rotating tapes with less manual intervention.

We now need the glue which ties all of this together…the software.

Backing up something is useless if you can’t find it later. The software that bridges the gap between your brain and the data you want to find is the most important choice in your LTO strategy. For example, basic software solutions, such as PreRollPost by Imagine Products offers the inherent ability to write and retrieve media to and from LTO, but it also adds several fields – tags – which allow you to further associate your raw data with searchable terms. 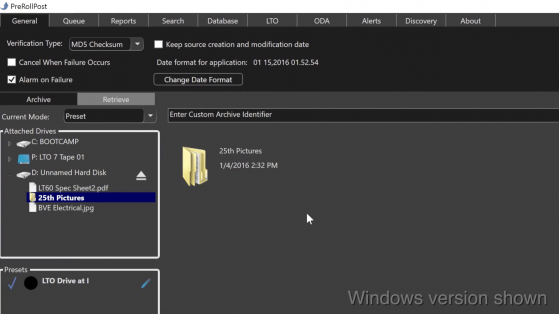 On the more robust side, we have solutions such as DNA Evolution by StorageDNA. While you can also write, and retrieve data and add tags, DNA Evolution also works with many NLEs to automate project and media archival, handle offline and online workflows with LTO, as well as interact with asset management. 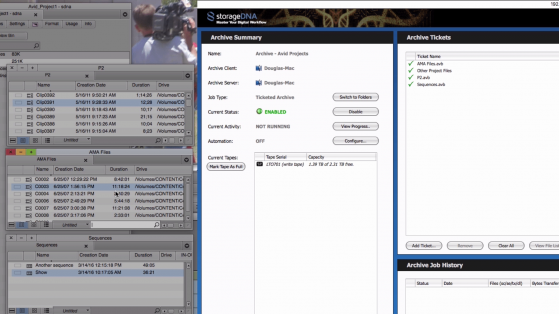 In heavy media-centric environments, the ability to find data by how the media was used, and not just by the basic attributes of the raw file can drastically reduce search time. When you have hundreds of TB or even PB, it’s cheaper than enterprise spinning disk, and almost as easily accessible.

Many solutions, including DNA Evolution, also come as an all-in-one solution – the drive as well as the software. One throat to choke as we say.

Single HP, Quantum, and IBM LTO drives traditionally run around $3000 or so. I’ve found some as low as $2000, but these are usually no-name brands that make my Spidey Sense tingle. 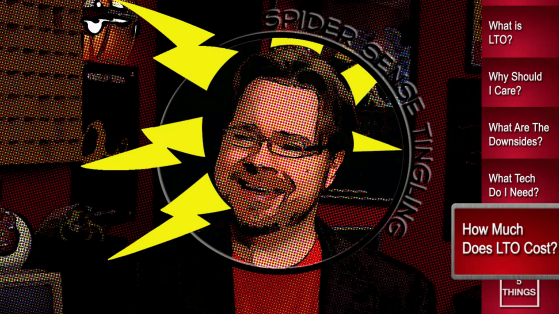 My Spidey Sense is tingling.

Software to make them go can start as low as $500, as is the case with software alike PreRollPost. On the more professional side, the software can go for $10,000 or more depending on the functionality of the software, and how it plays in your entire infrastructure and your workflows.

Turnkey solutions, such as DNA Evolution start around $8000 and scale from there, dependent on the hardware and software options. More often than not, the choice of what system to go with hinges on the pay now, or pay later philosophy. Do you want to pay less, and spend more time manually moving and tracking media and sifting through the data to find what you want? Or front load with more sophisticated software to reduce the labor involved later?

Have more LTO concerns other than just these 5 questions? Ask me in the Comments section or continue to stalk me online. Also, please subscribe and share this tech goodness with the rest of your tech friends.