Editor’s Note: This episode was not live-streamed.

1. What components do I need for live streaming?

Getting started is pretty easy. Thanks to platforms like Facebook and YouTube, you can do it with a few clicks from your phone. But that won’t help you much when you want to up your production value. Here is what you need to get started.

Live Streaming from your CDN to end users

To successfully plan your setup, we need to work backward and follow the old credo of “begin with the end in mind”.

So, the last part of live streaming is “how do I get my video to viewers”? This is normally done through a CDN – a content delivery network. A content delivery network takes your video stream, and not only pushes it out to your legion of fans but also does things like create lower resolution variants, also called transcoding and transrating. A good CDN also supports different platforms, such as streaming to mobile devices and various computer platforms. A CDN also takes the load off of your streaming machine. Imagine your single CPU being tasked with sending out specific video streams in specific formats for every user?

OK, now that we have our CDN, we need to send a high-quality signal to it.   I’ll address the specifics of that later in the episode, but suffice it to say, for a successful broadcast, you’ll need a decent Internet connection with plenty of headroom.

Live Streaming to a CDN

All CDNs will provide you with a protocol – that is, the way in which they want to receive the live feed for your broadcast. Now, this is different than the protocols that your end device will use – as a good CDN will take care of that mumbo jumbo translation for you….but only if you get the video to them in the right format.

These upload streaming formats can include HLS, RTSP, RTMP, and Silverlight formats. The end game is that your software needs to be able to stream to the CDNs mandated format for it to be recognized.

Speaking of software, this is one of the most critical decisions to make.
Will your streaming software ONLY stream, or will it also do production tasks as well, like switching between multiple sources, playing prerecorded video, adding graphics, and more? Of the utmost importance is “does your software support the camera types you’re sending it?”

….which leads up to the beginning of your broadcast chain… “what kind of cameras are you using?” Are you using USB cameras? Or, are you using cameras with HDMI or HDSDI outputs? If the latter, then you need an I/O device on your computer which can not only take all of the inputs you want but also in the frame size and frame rate you want.

You’ll quickly see that the successful technical implementation of a live stream is based on each part playing with the others seamlessly.

In case I wasn’t clear, your CDN choice is one of the most critical decisions. Your CDN will dictate your end users experience.

Here are some things to look for in a CDN.

Does your CDN allow an end user a DVR like experience, where they can rewind to any point in the stream and watch? Does this include VOD options to watch later after the event is over?

Many CDNs have a webpage front end, where you can send users to watch the stream. However, most users prefer to take the video stream and embed it in their own website so they can control the user experience.

Also, “is this a private stream?’ If so, ensure your CDN has a password feature. Speaking of filtering viewers, does your CDN tie into your RSVP system – or, are you using your CDN’s RSVP system? This is another way to create a more personalized experience for the viewer – as well as track who watches – and get their contact info you can follow up with them after the event if needed….as well as track the streams metrics – so you can improve the content and experience for the next live stream.

CDN’s can’t do all of this for free. This is why most CDNs restrict video stream quality on free accounts. This means your upload quality may be throttled, or the end users viewing quality or even total viewer count may be limited. The stream may also have pop-up advertisements at predefined intervals, or before the stream starts. 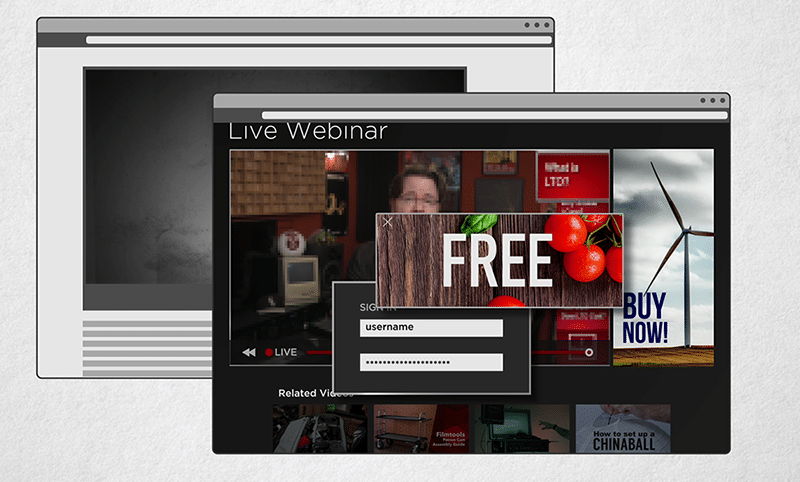 Often, I get asked, “what kind of bandwidth do I need to get a video stream up to my CDN?” I’ve got you covered with a quick reference chart: 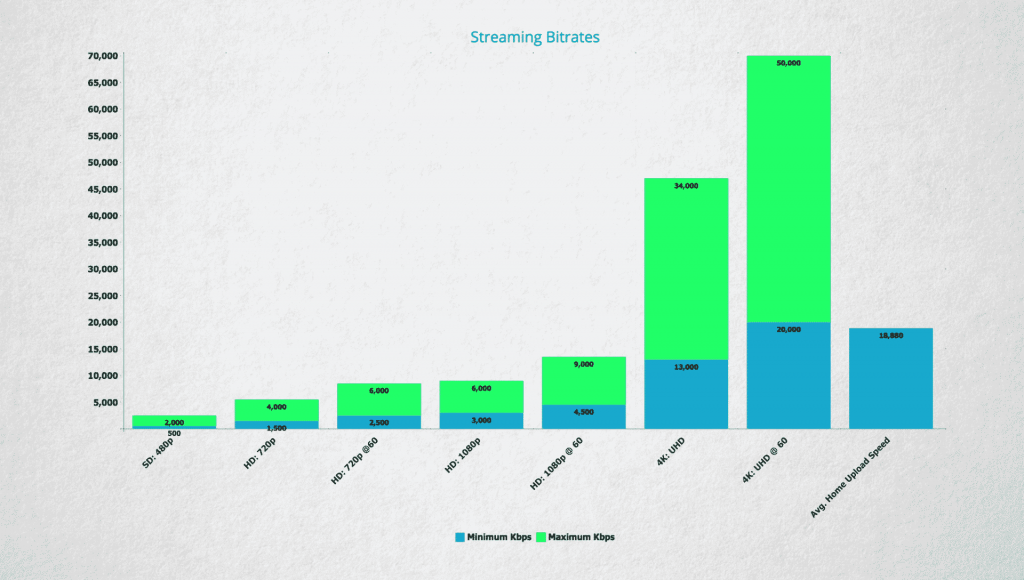 I cannot stress enough that you should stream with a wired connection if at all possible, and ensure you have plenty of overhead – I ballpark 40% more than these minimums. If you saturate your upload pipe from the first minute, dropouts will certainly happen with any kind of network congestion.

Normally most folks will try out a software production switching and streaming solution before moving on to a dedicated hardware solution. This is where we’ll start.

Arguably the most popular software solution out there is Wirecast by Telestream. Wirecast studio and the Pro versions support capture and streaming in SD and HD formats, on both Mac and PC. They also take in network IP cameras and other data based video sources. They also support streaming to multiple CDNs so you can attract viewers on various platforms – including Facebook and YouTube.

Wirecast also has some basic editorial ability, plus titles and chromakey tools. But most importantly, Wirecast supports a ton of I/O devices and camera types that it can switch between, so getting compatible cameras within your budget isn’t tough to do.

OBS Studio, or open Broadcaster Software Studio is very popular, namely because, well, it’s free. It’s cross-platform on Mac/PC/Linux and is normally the first choice of gamers. OBS can take multiple inputs, however, the number of input devices that is supported and format types is limited. The recording format to your system is also in a flash format, which commonly results in sync issues.

We also have vMix, which is a Windows based streaming and switching software. It can stream to 3 different destinations, or 1 destination if doing multi-bitrate formats. 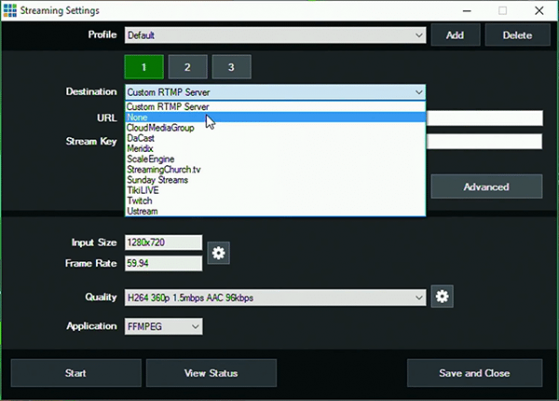 It too allows for switching between sources, playback of video files, recording at the same time as streaming, and your standard complement of transitions. It also supports NDI and can interface with 3rd party hardware to plug your cameras into.

These 3 solutions don’t possess a way to get “traditional” cameras in – that is, ones that spit out HDMI out HDSDI. For this, we need I/O devices, such as capture cards. These normally include those made by AJA or Blackmagic, or even Bluefish or Matrox. As always, check the tech specs before buying gear that needs to talk to one another.

The larger your production gets, the more you’ll realize you need something a bit more robust, and tools that more easily allow for multiple people to handle the show. This is where hardware solutions come into play. Again, let’s look at all-in-one solutions first.

Far and away, the most popular hardware system is the TriCaster line by Newtek. The TriCaster family can stream to a multitude of CDNs, and even has presets built-in for many of the popular ones. In addition, the TriCaster units take in SDI or HDMI formats, have professional audio connections, plus network NDI inputs. They also switch video, do titling, have video effects on every channel, and record camera isos – all in one box. The units also have a control surface for ease of use. I’ve been blown away the scale at which the TriCaster family has been used – everything from high school sports to million-dollar broadcasts.

Telestream also has the newer Wirecast Gear Family – which are hardware versions of the Wirecast software family. These give you the software ability found in Wirecast Pro, without having to buy a 3rd party I/O device. You also get New Blue Titler for generating graphics and titles. The various models start at $5000, but really take the guesswork out of the hodgepodge of live streaming gear. One throat to choke, as they say.

For dedicated streaming only devices, Teradek is pretty popular. Teradek has a ton of various streaming devices, and several of them can push to RTMP capable CDNs.

We also have tools like LiveU, which uses cellular connections to stream, instead of relying on a hardwired or wifi signal, which allows you to be a bit more mobile.

I also dig Haivision, which is a bit more enterprise, but has amazing video quality at a decent bitrate, albeit at only SD and HD formats.

I’ve also been waiting for the AJA Helo to start shipping, in fact, it should ship within a few weeks of this broadcast. It doesn’t bother with any of the video production tools – it’s designed to just stream – and lock in the streaming settings so to start streaming, you hit one button. 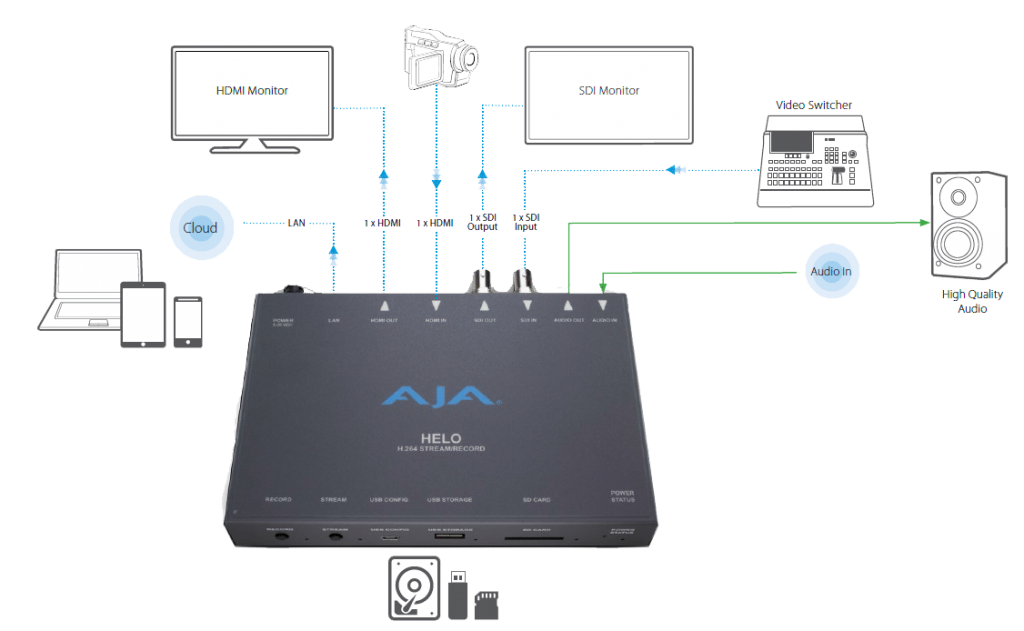 There are a ton of solutions out there, so my advice to you is to make sure everything plays together first before you click that BUY button.

If your CDN has restrictions on data usage, or you’re just trying to be judicious with your bitrate, broadcasting at 720p @23.98 or 30 is fine for a vast majority of viewers. Most viewers -especially those on mobile devices- won’t be able to tell the difference. The only caveat to that is with gaming – where you want the fastest frame rate possible.

Don’t expect sync across all devices and platforms. CDNs need to create the video streams appropriate for the end viewer. And depending on where they are located in the world – and what provider they are using, whether it be an ISP or a cellular carrier, and what device they are using, the stream will be delayed. This delay could be a few seconds up to 30 or so…and this, unfortunately, you don’t have much control over.

Live streaming is primarily based on video standards. That is, UHD, HD, SD, etc. Many gamers, or folks trying to use a desktop as a video source, might see stretching of an image, or black bars on the top or bottom or sides of the computer screen. This is most likely because your computer signal isn’t a standard video aspect ratio, and it’s being distorted to fit into a video standard.

Lastly, the most common complaint during live streaming is audio. Dips in volume can cause fiddling with the viewer’s volume knob, and too loud can cause ear piercing distortion. Audio should not be an afterthought – think about using a compressor, and keep that signal audible and yet under control.

Have more live streaming concerns other than just these 5 questions? Ask me in the Comments section. Also, please subscribe and share this tech goodness with the rest of your techie friends.