On this episode of 5 THINGS, we’re checking out the 2018 Mac Mini from Apple, and the new eGPU Pro offering from Blackmagic and …well, Apple. We’re also running benchmarks against your favorite (or least favorite) NLEs: Final Cut X, DaVinci Resolve, Adobe Premiere Pro, and Avid Media Composer. Let’s get to it.

NOTE: The eGPU Pro in this episode was a pre-release, beta model. Your results may vary with the shipping version.

What better machine to test how well an external GPU works than on a machine that has a horrible built-in GPU? Yes, tech friends, the powerful top of the line 2018 Mac Mini is built on Intel technology, which means there is a small GPU on the chip. While this GPU, the Intel UHD Graphics 630, isn’t going to break any performance records, it does provide a user with a basic way to feed their screen without a 3rd party graphics card. 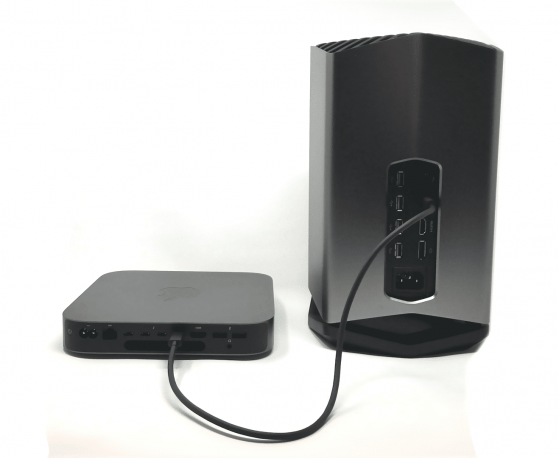 The Mac Mini also rocks USB-C for Thunderbolt 3 access. It’s this 40Gb connection that provides the bandwidth for an eGPU to shine. Slower I/O, like Thunderbolt 2 or even older connections, simply don’t provide enough bandwidth to accommodate all that a modern GPU can provide. The new Mini provides four USB-C Thunderbolt 3 ports, enough for up to 2 eGPUs. I also dig the legacy USB 3 ports, too…as we all have peripherals like keyboards and mice that still rock the legacy USB type A.

Back to throughput, the 2018 Mac Mini also has an option for a 10GigE copper connection. I know, many signify 10GigE as a sign that it’s “for professionals”. Quite frankly, 10GigE is the new 1GigE, so if you haven’t been looking into it, now would be a good time.

The Mini has many different options, from an entry level i3 processor to the midrange i5, to the i7 model that l I tested with. The units can be configured with 4 or 6 cores, and speeds of up to 4.6GHz in Turbo Boost Mode. For RAM, the 2018 Mini supports up to 64GB, although you may need to take it to an Apple store to get it installed. You can also build your system out with up to a 2TB PCI SSD. 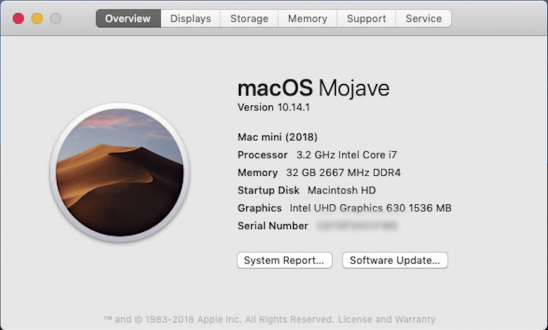 I ran some benchmarks on the Mini and compared the results with other Geekbench scores of other popular Apple machines.

Here, we have a top of the line 2013 Mac Pro, and a maxed out 2017 MacBook Pro, plus my Hackintosh build from a few episodes back. You can see the 2018 Mac Mini is apparently no slouch when it comes to performance. Plus, it helps that the last Mac Pro is over 5 years old, too.

Let that sink in for a minute.

During testing, I was alerted to the fact that the Mini will throttle the chip speed when the unit hits 100 degrees (Celsius), so if you push the system too hard, the performance will suffer. 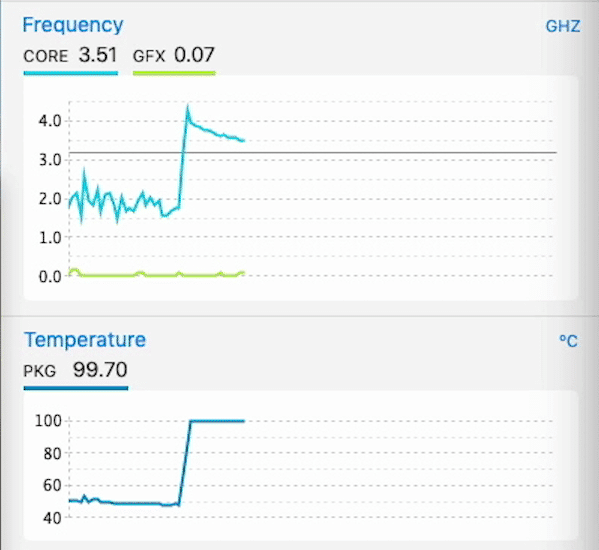 There are a ton of in-depth 2018 Mac Mini reviews out there, and let’s face it, you’re really here for the eGPU Pro and video post-production stuff…so let’s move onto that…now.

Like the non-pro model before it, the eGPU Pro from Blackmagic simplifies the addition of enhanced graphics processing by putting a GPU in an external enclosure. Also, like the previous model, the Pro has an 8GB card in it, albeit with a faster 8GB card than the Radeon Pro 580 in the previous gen. The new GPU is the Radeon RX Vega 56. Both models are meant to capitalize on the Metal playback engine, although they will apparently utilize OpenCL or CUDA.  Given the future of both of those last two standards on the Mac platform….best start getting used to Metal. 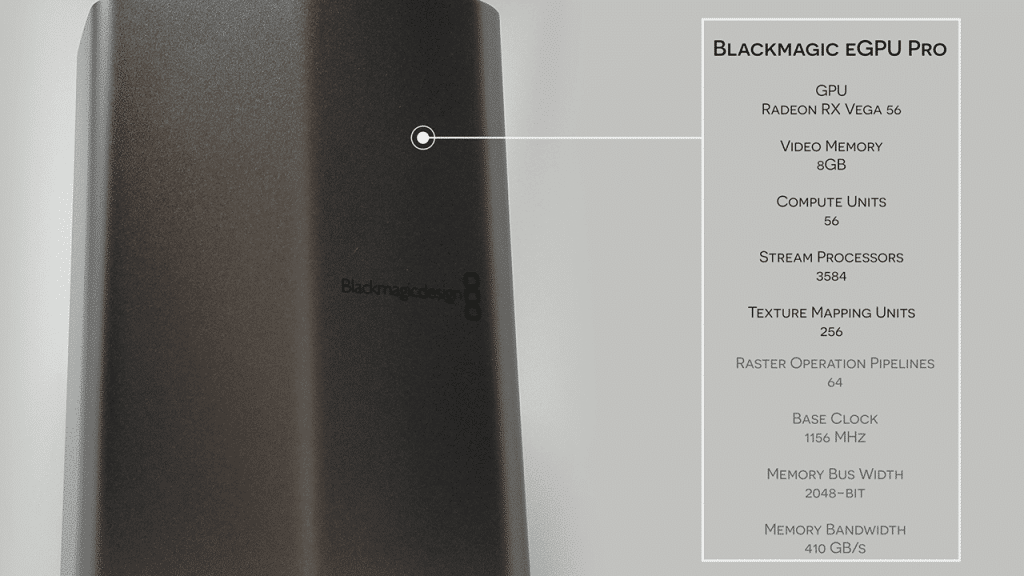 The eGPU Pro also features a Display Port, unlike the non-Pro version. This allows for up to 5K monitoring if you so desire…as the HDMI 2.0 port tops out at 4K DCI at 60fps. Both units come with 4 USB 3.0 ports and a spare USB-C Thunderbolt 3 port so you can connect even more peripherals through the eGPU.

Now this sucker is damn quiet. Aside from a small, white LED indicator at the bottom of the unit, and an icon in the menu bar, you wouldn’t even know the unit is running. 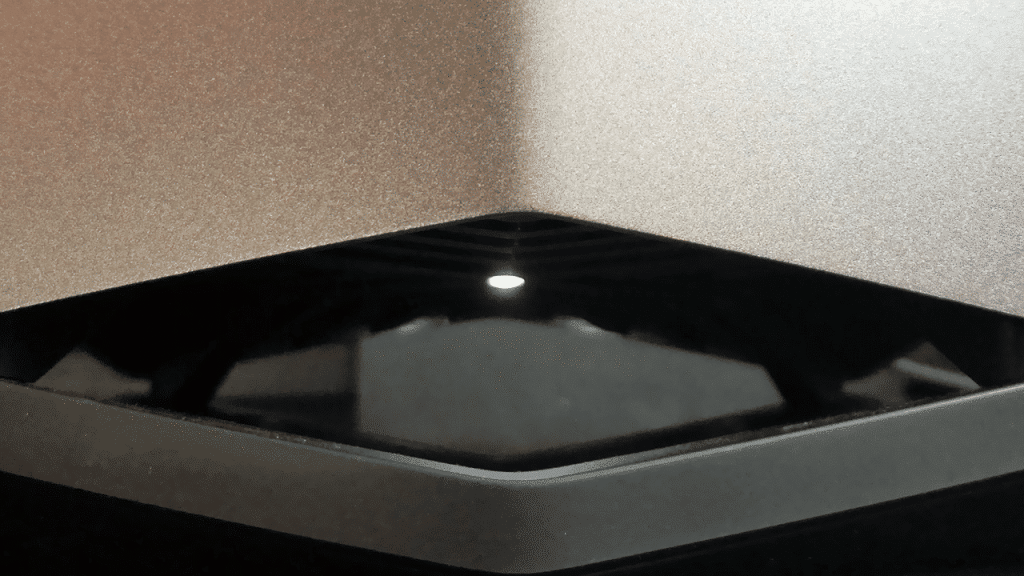 The Blackmagic eGPU Pro is very quiet. The only physical indicator is a small white LED at the bottom.

The unit is a mostly a massive heatsink, so expect heat to come pouring out of the top.

The eGPU Pro ships with a 1 foot USB-C cable. This cable is VERY short, which means this unit is always going to be next to your computer.

While I didn’t test it, I understand longer USB-C cables can cause issues, so stick with the cable that came with it. 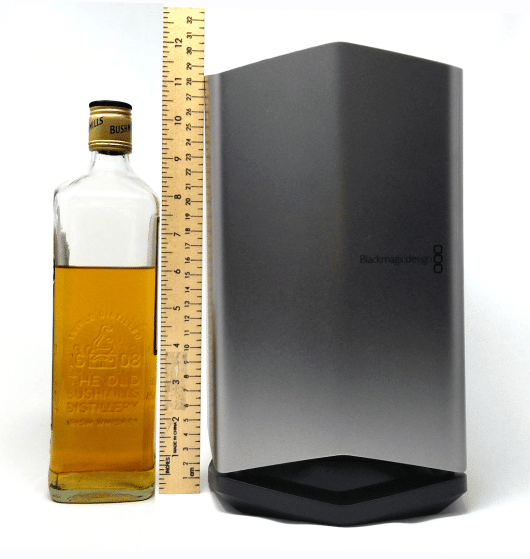 It’s imposing. So is the size of the Blackmagic eGPU Pro.

While the eGPU Pro is cool looking, it‘s pretty hefty and does take up valuable desktop real estate. It also dwarfs gear next to it, like the Mac Mini. In fact, it’s larger than a 2013 Mac Pro, among other….things.

What is uniquely different, however, is that the eGPU Pro is only certified to work with Mac OS 10.14 Mojave. I like this, as support in OS 10.13 High Sierra for eGPUs was a crapshoot at best. Interestingly enough, nothing needs to be installed in Mojave for the eGPU Pro to run – the GPU drivers are built into the OS. In fact, the eGPU Pro comes with no drivers or software to install.

I tested with a pre-shipping model of the Pro –in fact, the packaging was still for the non-pro version. As such, there was no documentation or quick start guide with the unit.

The ship date for the eGPU Pro has now slipped a month from November 2018 to December 2018; perhaps code is still being written for Resolve and FCPX, as I did find some issues. Let’s check that out now.

Please check out the video for specifics! 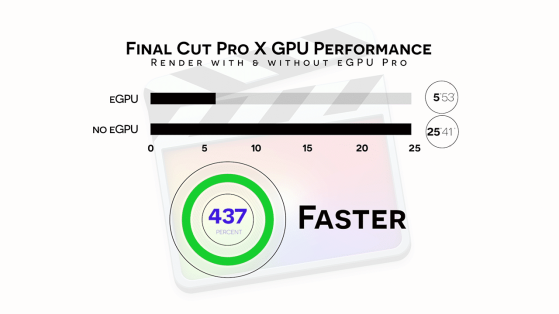 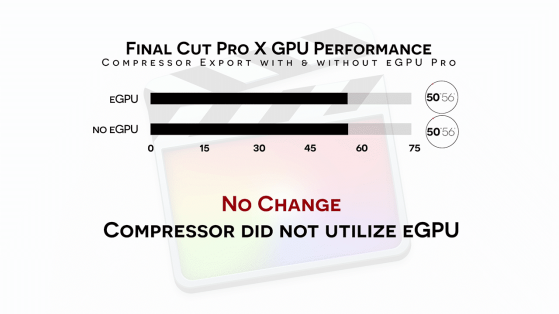 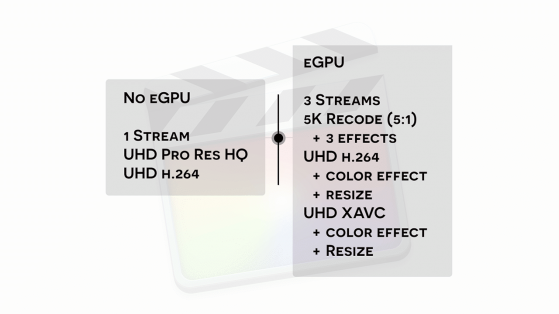 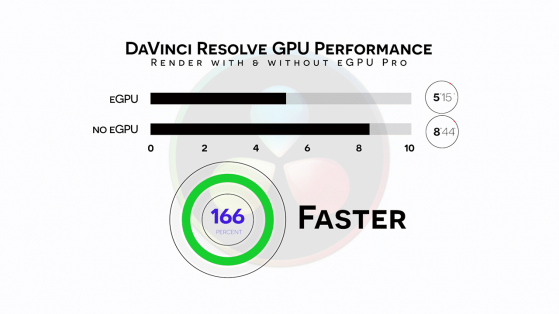 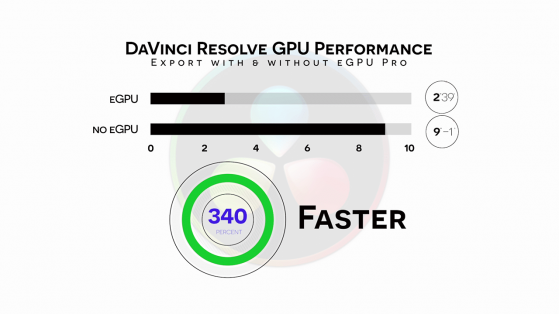 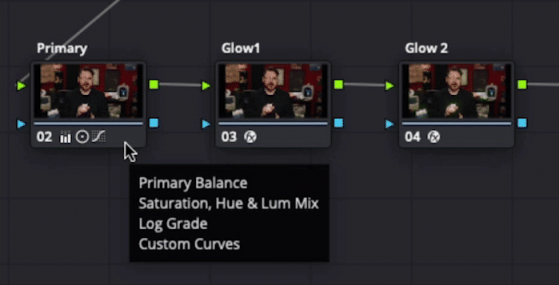 Powergrades by Jason Bowdach to bring the Resolve system to it’s knees. 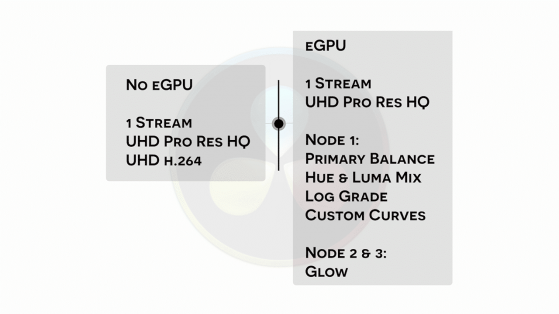 Please check out the video for specifics! 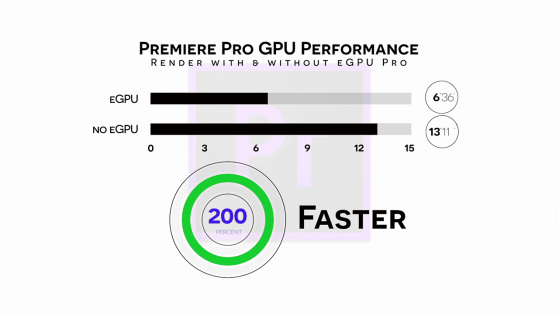 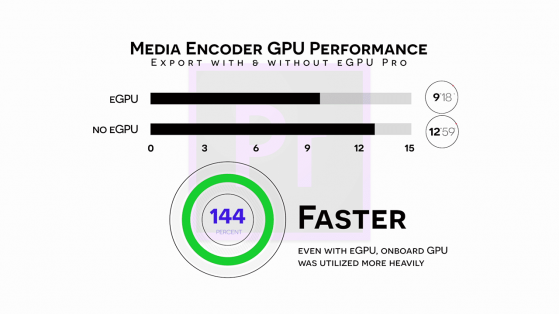 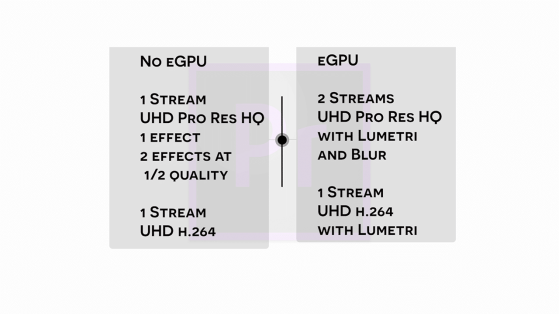 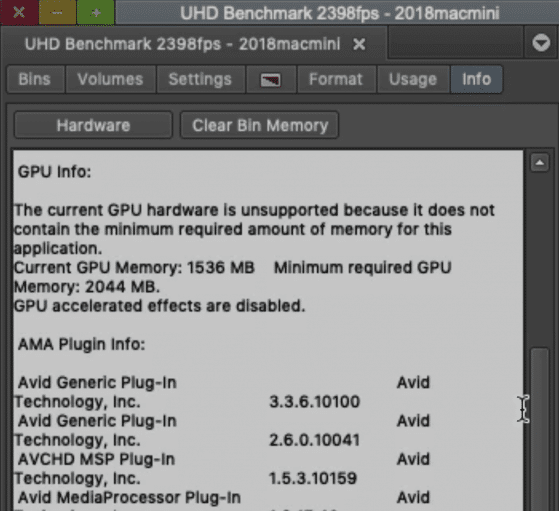 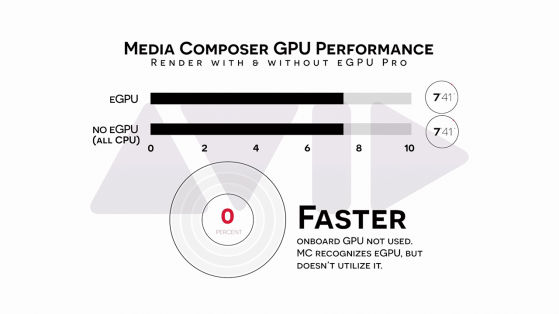 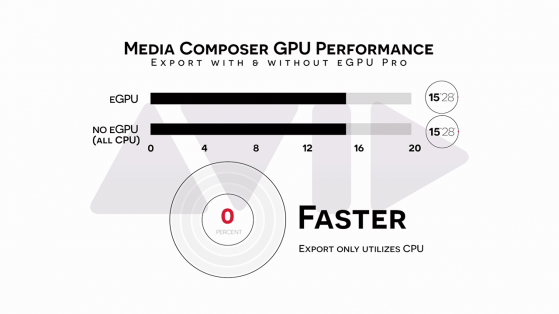 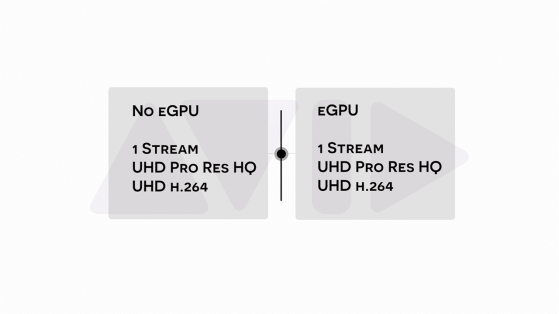 Lots of data to crunch!

It’s obvious that despite the initial high benchmarks via Geekbench, the 2018 Mac Mini, on its own, doesn’t really have a fit for creative uses in Post, unless it’s used as a file server, or perhaps a lone Mac in a sea of Windows machines when you need an easy way to create ProRes files. I concede that it may work for story producers or preditors, but I find that it’s never a good practice to hit the upper limits of a new machine from day 1.

I should also note that the 2018 Mac Mini is not qualified by all NLE manufacturers.

Avid hasn’t qualified it as of now. 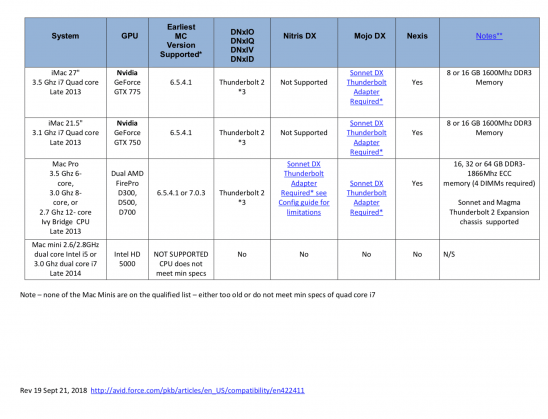 It doesn’t meet the minimum specs that Adobe publishes. 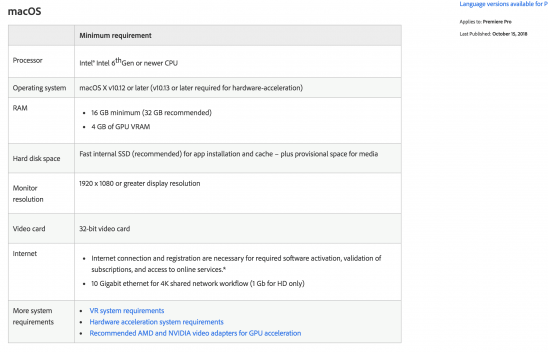 The Blackmagic DaVinci Resolve Configuration Guide calls out specifically that the Mini should not be used.

Apple’s requirements for Final Cut Pro X, on the other hand, are barely met by the Mini. 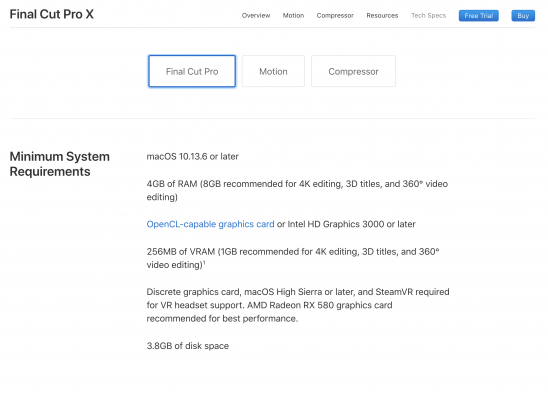 Personally, I’d save the $2000 this machine costs and put that towards an iMac or iMac Pro, or perhaps the highly anticipated 2019 Mac Pro.

Now, as for the eGPU, it’s important to remember that all of this is new. This was essentially a science experiment. Mojave, as of this episode, is only at 10.14.1. Apple, one of the partners in this eGPU collaboration, still doesn’t have all of the bugs worked out, as Compressor doesn’t appear to utilize it. That being said, speed increases in FCPX and Resolve are undeniable and certainly showcase the speed a good GPU can bring to the post table.

Adobe, while not part of the Apple/Blackmagic eGPU soiree, also shows speed benefits out of the box – and that’s before Adobe has done any optimization for it. That’s pretty impressive.

Avid, on the other hand, has never been a GPU powerhouse. My tests only really showed that Avid has some serious engineering to do to incorporate eGPUs into future releases.

If this eGPU Pro solution could breathe life into an old system, I might be more inclined to suggest it…however, the fact that you need a relatively recent Thunderbolt 3 enabled machine makes that “old system” label inappropriate.

Now, you can ‘roll your own’ eGPU, by using a 3rd party external chassis and compatible graphics cards. They can be parted out and purchased for under $800 on the street…$400 cheaper than the eGPU Pro. While I don’t expect an all in one solution to be the same cost as a DIY, a $400 delta is too big of a chunk to ignore.

The only real time I can suggest a solution like this is for those folks who edit on a MacBook or a MacBook Pro. Those road warriors who are on the go and editing but need to come back home base at some point and do some serious heavy lifting. But is that market large enough? Gaming and other GPU enabled applications have a much wider reach than the Post community.

Regardless, I’m excited to see if in 12-18 months NLEs have been able to start utilizing eGPUs better than they do from day 1.

Have more Pro eGPU and Mac Mini questions other than just these 5? Ask me in the Comments section.