Today we’re looking at UHD and 4K. What you need to know for production and post-production, and how you can use it. For sake of simplicity, when I use the term “4K” know that I am referring to both UHD and true 4K resolutions.  Let’s get started.

The reasons to shoot 4K are pretty decisive. In a world of HD, SD and horrible handheld cell phone video, 4K allows flexibility with re-framing shots for current HD distribution methods. Most importantly, it allows for changing your story – visually – in post.

Often we have wide shots and close-ups. This usually requires 2 different cameras, additional lighting, manpower, and all the accouterments that go along with a multicamera setup. 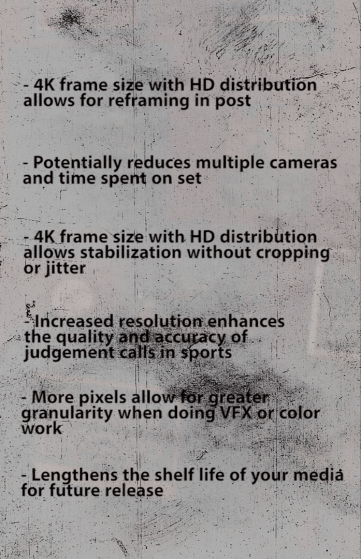 Many of these scenarios can be rectified with a single 4K camera, allowing for a simultaneous wide shot as well as a Medium Shot or Close Up. This lowers production cost and time onset.

A common tool nowadays is stabilization. Handheld cameras, and run and gun setups often generate footage that is…well, far from a Steadicam shot. Stabilization in post can help alleviate some of this jitter. The increased frame size means the reframing that takes place during stabilization can still generate a smoother, HD output.

Many other scenarios can benefit from a 4K image size. Imagine all of the blown calls in your favorite sports ball game that could have been rectified with a sharper freeze frame.

Having more pixels in your image also allows for higher image fidelity, ultimately allowing for greater, more granular control of color and VFX while in post-production.

4K is also a way of preserving the longevity of your project. 4K acquisition alone ensures that your content can be more easily repurposed in the future and have a much longer shelf life than HD or SD content.

Plenty of reasons to pass, or at least pause, on going all in 4K. First is cost. 4K acquisition will require a new camera, as well as all the parts and pieces needed to complete your rig. If you intend to work natively in 4K in post, you’ll probably need an upgraded NLE to handle it, including a CPU, GPU, and storage – more about that later. You’ll also need a way to view 4K- both on your computer screen as well as your video screen – and a 4K I/O device to handle it. A significant technology upgrade. 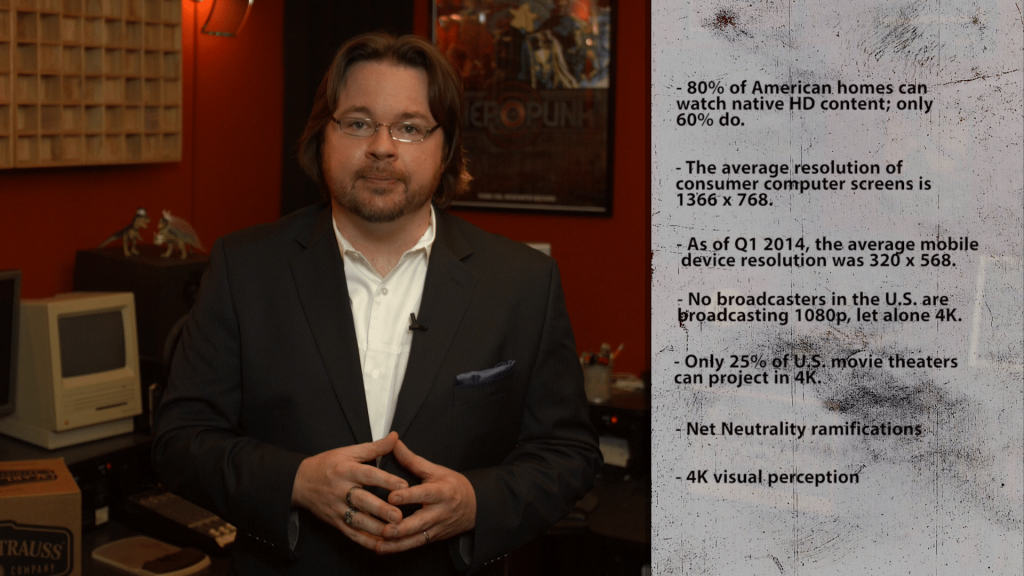 A vast majority of end-users can’t view 4K. While 80% of American homes have HD capable TVs, only 60% of these homes consume HD content, let alone 4K. This means that plenty of folks still consume SD content. Most computer monitors aren’t used at HD resolution, and can’t even handle 2K, let alone 4K. Reports show that the average resolution of a computer screen is 1366 x 768. Mobile devices typically have resolutions even less than that.

Even if your audience DID have 4K capable monitors, no major broadcasters in the US are actively broadcasting in 4K. Their satellite and cable systems infrastructure – including your way overpriced set-top box – can’t handle transmitting or decoding 4K signals. Theaters are one of the only places that can view 4K – if the theater is even equipped for it. Only about a quarter of US theaters can currently project 4K.

The online providers who do support 4K, Netflix, for example, require a larger pipe to your house for you to view the content. Here in the states, we are gouged on the pittance of bandwidth afforded to us. The current struggle over Net Neutrality may also penalize viewers in the future who need the additional bandwidth.

Lastly, there is a constant debate over whether the human eye can even perceive 4K in real-world scenarios. We certainly can discern 4K from HD, but if we’re sitting on the couch watching our 4K TV from 8 feet away, can our eyes really tell the difference? The International Telecommunications Union says that viewers with 4K content can sit twice as close to the TV than HD sets without a perceivable difference in quality. What good is that when we’re getting larger screens so we can sit farther away? The reality of a drastic visual difference in your living room has not yet been solidified. 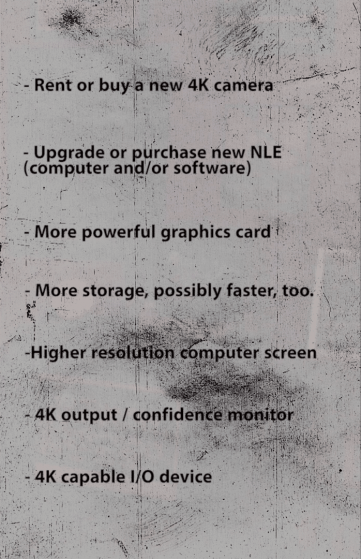 I’m not going to turn this into a 4K camera review, but suffice it to say, you’re going to need to buy or rent a 4K camera. Depending on which camera, and what codec you shoot in, you’re going to need appropriate storage. This could be anything from newer, faster, and larger memory cards, to Solid State hard drives. You’re also going to need faster and larger storage to offload your footage onto. And it’s got to be portable. Unless you’re a throwback to the film era and are very conservative with your shooting ratio, you’re gonna run out of space on your memory cards or solid-state drives very quickly.

Here are some comparisons of frequently used 4K acquisition codecs, along with more routinely used SD and HD codecs. I’ve also added more edit-friendly codecs to the chart for comparison.

This is where you hit pause and scrutinize my math. 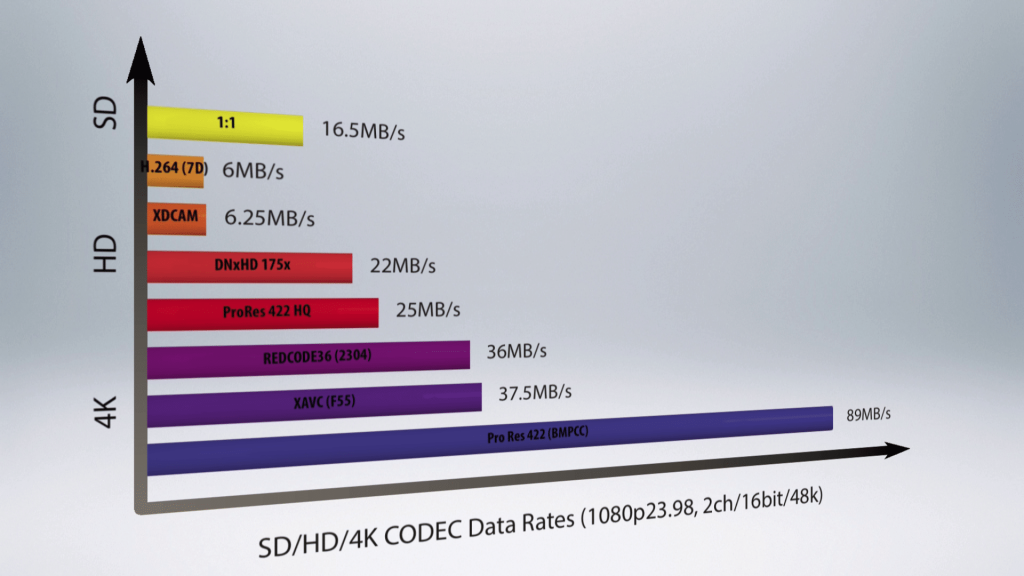 Many shoots often have DITs onset to offload then wipe the cards or drives and get them back to the camera operator. Often these DITs are also creating edit worthy proxies in addition to adding metadata to the clips.

If you’re moving from tape or thinking of moving to an offline/online workflow for your 4K project, you should seriously consider having a DIT onset.

You’ll also have to get used to blocking your shots a little bit differently. Why? True 4K has a different aspect ratio than HD. True 4K is 1.9:1, while HD is 1.78:1. Also, many cameras that shoot 4K have an increased sensor size from their HD counterparts -which means what fits within your frame in 4K will be different than what your viewfinder sees in HD.

First, you need to determine if you are working natively in 4K through post, or doing an offline /online workflow – that is, editing in a lower resolution, then reconforming to the 4k after the creative edit. If you’re looking to work native, expect to invest a bit more. Your CPU may not have the horsepower to decode and work with 4K in Real Time -and give you a pleasurable editing experience. Upgrades can also include a newer GPU. Many NLEs have begun offloading much of the brute force needed to play video off to the graphics cards. Also, expect to put more RAM in your system.

How fast and how much do you ask?

That all depends on the 4K codec you’re working with. But rest assured, any computer more than a couple years old doesn’t stand a chance.

Oh, and as I mentioned earlier, you’ll need a larger format computer and video monitor, capable of handling 4K. You’re playing with fire by working on 4K, but being able to SEE in 4K.

You’re also going to need disk space and bandwidth. This means bigger disks and more of them. Depending on your 4K codec, you may need uber-fast storage: such as RAIDs connected by SAS, Fibre, or 10GigE. Think of these connection methods if you’re shooting in DPX or ProRes 4:4:4:4. For more highly compressed files, such as XAVC, you’ll need less speed to and from your system, but an extra faster computer to compensate for the additional compression. There’s a tradeoff for these smaller files – the computer has to work harder to play them back – which means your computer has to be even faster.

Here is the codec data rate chart I showed earlier, this time with the bandwidth available by commonly used connection types. Lots of data here. It’s OK, you can hit pause, I’ll wait. 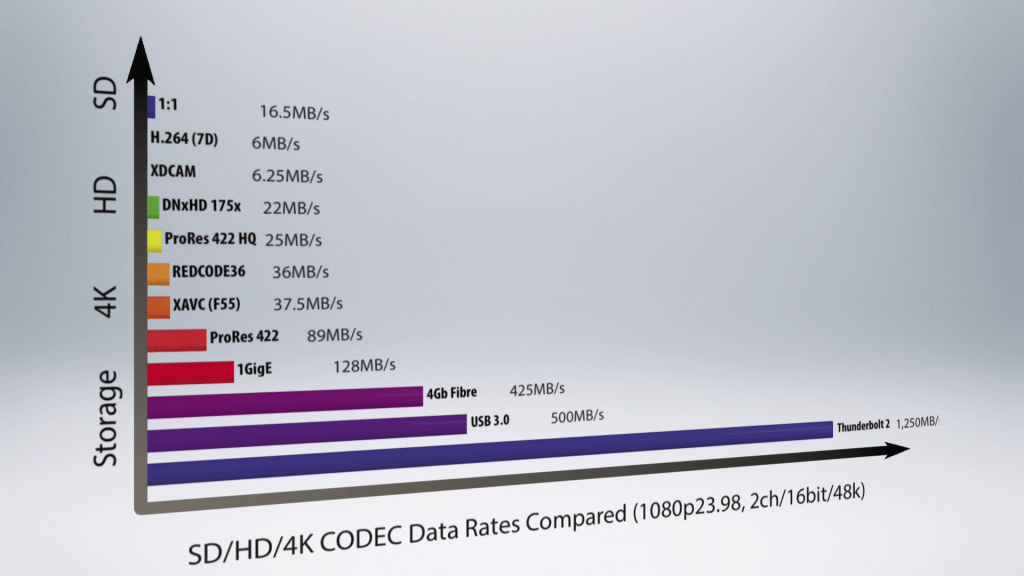 The one constant is that any 4K recording scenario, you’re going to need more disk space. Period.

Next, we need to choose our editor. Currently, Avid Media Composer only has an HD timeline, and can only output HD, however it can handle an HD frame size extraction of a 4K image – using frame flex. Current versions of Adobe Premiere and Final Cut Pro X can handle 4K as well…FCP 7 – not so much. Sony Vegas and Grass Valley Edius can also handle 4K.

The key to any successful 4K workflow is knowing what codec you’re shooting in. This dictates virtually every subsequent tech conversation about your project and how to see it through post.

Some broadcasters still air material that originated in standard definition. As long as you review where you want your project to end up and ensure the deliverables don’t HAVE to be 4K – you’re golden.

Most importantly, however, is the simple truth that has been around since the dawn of modern cinema. Technology does not tell your story. Gear does not make you a better storyteller. Focus on that first and foremost, and let technology complement – not lead – your story.

This is just the tip of the 4K iceberg. Have more 4K concerns other than just these 5 questions? Ask me in the Comments section. Also, please subscribe and share this tech goodness with the rest of your techy friends.

4K is a great scam perpetrated by struggling TV manufacturers. Better pixels as opposed to more pixels makes more sense. Check out Dolby vision to see what could be possible without major investment changes in equipment. http://variety.com/2014/tv/news/dolby-vision-hdr-tv-tech-to-be-included-baselight-systems-1201147677/

If you watched with Revelens, I linked to you when the point on viewing distance and perception of higher quality was mentioned. It’s a valid concern.

Too funny.
BTW: Here’s a link to an online calculator that shows the screen size vs. viewing distance to perceive any benefit from 4K. http://referencehometheater.com/2013/commentary/4k-calculator/

The real scam is referring to UHD as 4K.

Please folks do not do that.

4K might actually be cheaper if you don’t have that much gear but want to upgrade. You can pan, slide and zoom your 1080p timeline with just one 4k camera. Consider that.

I agree that having 4k gives us more choices in post and freedom to change shots. But where does that stop? I feel ‘fixing it in post’ is no longer a joke phrase but is becoming a way of life. I’ve also just started editing a project that’s been shot on 4k and it’s been a massive learning curve!